What Handbook Changes Should You Make as a Result of the Recent NLRB Memo?


There has been much chatter about the recent memorandum issued by Peter Rob, general counsel for the National Labor Relations Board. This memo highlights the NLRB’s decision to roll back previous rulings that had made nine common human resources policies illegal to protect the right of employees to participate in “protected concerted activities.”

After reviewing these specific policies, the NLRB determined that unless these policies were being applied in a manner intended to interfere with an employee’s right to engage in protected, concerted activities, then they were legal for employers to apply to their work environment.

So, what does this mean for funeral service businesses?

Death-care professionals need to look at their existing employee handbooks and/or HR policies to determine if they should be revised to address the change in the NLRB’s position on these policies. Let’s take a look at the nine policies in question to evaluate whether there is a possible impact on the business. 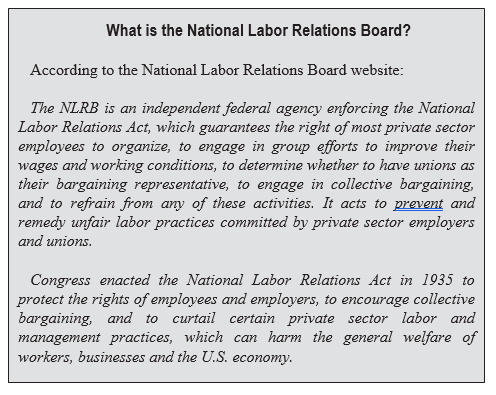 7. Company logos don’t belong to the The NLRB acknowledges that “employers have a significant interest in protecting their intellectual property, including logos, trademarks and service marks. Such property can be worth millions of dollars and be central to a company’s business model. Failure to police the use of such property can result in its loss, which can be a crippling blow to a company.” Funeral service employers can therefore ban employees from unauthorized use of the company logo or other intellectual property that is owned by the business. For example, employees should not be using the funeral business logo on their social media accounts. The employee handbook can address this issue under both the social media policy and the employee code of conduct.

8. Who speaks on behalf of the funeral business? The NLRB memo also indicates that employers can require that employees have authorization to speak for the employer. Or in other words, funeral service employers can have a specific policy that makes it clear that employees are not authorized to speak on behalf of the business unless specifically granted authorization. This is another element that can be covered in the social media policy.

9. What do you mean you’re working for our competitor? Even before the issuance of this memo, the board did recognize that employers had a right to be concerned about conflicts of interest by their employees and to find ways to address those concerns. This current board makes it clear that employers can protect themselves. Funeral service businesses should include in their confidentiality policies clear language that either bans (or requires disclosure of) conflicts of interest (disloyalty), or employees who have had in the past or continue to have financial interest in competitors of their current employer (self-enrichment). Failure to disclose this information can be a violation of the code of conduct.When looking at the whole of these nine policy changes, it is evident that they can be very impactful to funeral service employers. Not only in terms of employee interactions with each other, management and the families they serve but on the successful long-term profitability of the business. No funeral service owner/manager wants to deal with a harassment issue nor do they want to lose their valuable preneed contracts to a competitor. Can you imagine your funeral home logo used on an employee’s social media account when they are posting objectionable content? At first blush, this NLRB memo may not appear to be of any significant interest. But the reality is that the NLRB change in position on these key issues allows funeral service employers to protect their businesses more effectively in several key areas.